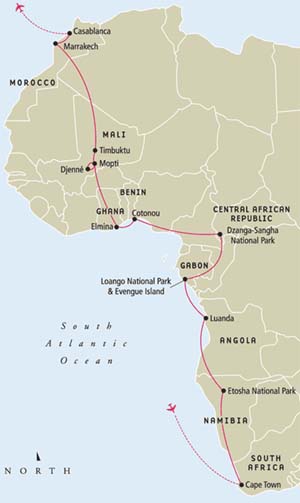 In November I’m joining a trip organised by Zegrahm Expeditions using a charted aircraft to hop up the west coast of Africa from Cape Town to Casablanca. I’m not big on groups but this looks like an intriguing way to cover some territory where I’m a total beginner. It’s also easily the most expensive trip I’ve ever set out on!

Along the way Maureen and I will be visiting nine different countries. Just getting the six visas we required was a time consuming and expensive process. Internet connections permitting I hope to be posting my travel blog from South Africa, Namibia, Angola, Gabon, Central African Republic, Benin, Ghana, Mali and, finally, Morocco.