Cap Haïtien on the north coast of Haiti is the second largest city in the country and although it’s surrounded by the usual Haitian chaos the city centre is remarkably tidy and orderly. It’s got an almost Mexican or Central American feel, particularly in the spacious central square, the Place d’Armes, with its statue of Dessalines and Notre Dame Cathedral. 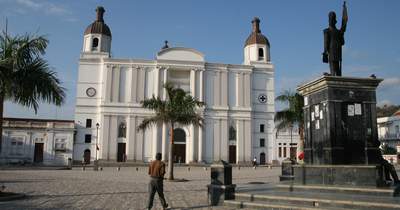 I stayed in the delightful Hostellerie du Roi Christophe which, although it dates back to the French colonial period, has a real Spanish flavour with its courtyards and arched entrances.

Staying in a hotel named after King Chrisophe was entirely appropriate since the number one reason for coming to Cap Haïtien is to make the pilgrimage 20km south to the town of Milot where Christophe built his huge palace Sans Souci as a Haitian version of Versailles. The palace fell into ruin after his death and then was badly damaged by a huge earthquake in 1842, but even the ruins are a magnificent sight

A road winds steeply uphill from Sans Souci to the immense and brooding fortress the Citadelle. Christophe intended it to be an insurmountable obstacle to any French attempt to recapture Haiti and reintroduce slavery. They never tried. The Citadelle still has hundreds of cannons and 50,000 cannon balls, many of them neatly stacked outside the fortress walls.

There were many Haitian visitors when I looked around the Citadelle, but only a handful of overseas visitors. The fact that some of the Citadelle towers featured very impressive and completely unfenced sheer drops is probably confirmation that foreigners are so few and far between. They’d need to do something about that before a tourist fell over the edge! Interestingly Labadie beach, just a few km along the coast from Cap Haïtien is the only place cruise ships stop in Haiti. A couple times a week a cruise ship out of Miami anchors offshore and thousands of passengers spend the day on the beach and in the Caribbean waters. None of them get to see nearby Cap Haïtien or the Citadelle, but the roads are so appalling transport would be all but impossible. You need a 4WD. It’s said that once upon a time the passengers didn’t even know they were landing in Haiti. They were told the stop was at ‘paradise island!’