Observant visitors to Bali soon become familiar with canangsari, the little offerings which are put out every morning for the spirits, good and bad, which pervade everything in Bali. A little woven tray sports a few flower petals, a few grains of rice, perhaps a cracker or two, an incense stick. For the spirits it’s a combination of food and sustenance, respect and veneration … and bribery. 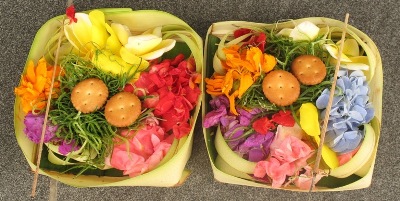 The good spirits are looked after with offerings placed on shrines and temple stands, but you’re far more likely to see the canangsari slung down at ground level for the bad spirits. An offering at the doorway to your shop will – hopefully – persuade those evil demons to stay outside, not come in to the shop where they could disrupt business. Busy gang (a gang is a Balinese laneway) intersections at Kuta Beach will be heaped with offerings. Well how else do you stop speeding motorcycles from colliding?

Of course like everything else canangsari have to move with the times and today the time-poor housewife may not have the time to create her own offerings. Market sellers have always offered ready made canangsari and today you can even buy them by the bagful in supermarkets. Of course a properly constructed canangsari has to have a porosan, a continer with betel leaves, areca nut and lime (the three necessary items for betel nut chewers) which represent the Hindu trinity of creator (Brahma), preserver (Vishnu) and destroyer (Shiva). ‘Without a porosan it’s just a decoration, not a real canangsari.’