‘It’s a narrowboat, not a barge (they carry coal), not a longboat (they carry Vikings), this is a narrowboat.’ That was my introduction to English canal travel quite a few years ago on a trip with my pre-teen (at the time) children. We travelled up the Avon River to Shakespeare’s Stratford-upon-Avon and then up a canal towards Birmingham. 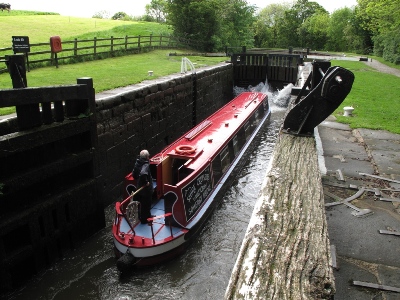 This time we were travelling with four friends in the northern English counties of Yorkshire and Lancashire. We picked our narrowboat up in Sowerby Bridge, travelled down the Calder & Hebble Canal, up the River Aire to the big northern city of Leeds and then up the Leeds & Liverpool canal to our finishing point of Foulridge. Our week of travel covered about 150km and took us through 93 locks. There’s a general speed limit of 4mph, 6.5kph, so you’re not moving fast. 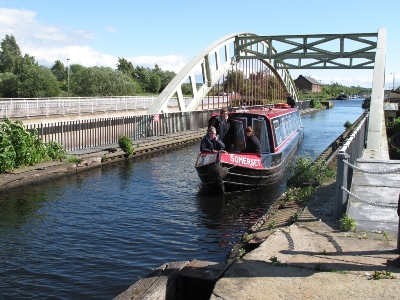 ▲ At Stanley Ferry there’s an interesting aqueduct looking remarkably like the Sydney Harbour Bridge, but since it was built between 1836 and 1839 it’s about 100 years older. At the end of our trip, at Foulridge, there’s a 1488 metre tunnel built in the 1790s. It’s one way and we continued on through it towards Burnley before making a U-turn and finishing up in Foulridge.

It’s the locks, taking you up and down the canal, which are what makes English canal travel so interesting. You almost always have to operate them yourself, which usually means winding the ‘paddles’ open with a windlass to let the water in or out of the lock and then heaving on the lock gates to allow your narrowboat into and out of the lock. The ‘narrow’ part comes about because narrow locks are usually 7 foot (2.13 metres) wide and the boats are usually just a few inches narrower, the standard narrowboat width is 2.08 metres. The locks on this trip were all double width, wide enough to get two boats into a lock side by side. With all this hard work a canal boat trip can be much like a gym workout and great fun for energetic kids. 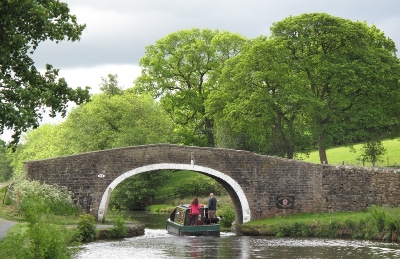 Construction of the Leeds & Liverpool Canal started in the late 1700s so you’re often operating canal equipment which dates back over 200 years. It’s a fine opportunity to get to grips with early industrial revolution engineering. And to catch a glimpse of an unusual side of England, winding your way through beautiful countryside or entering towns by the ‘back door.’