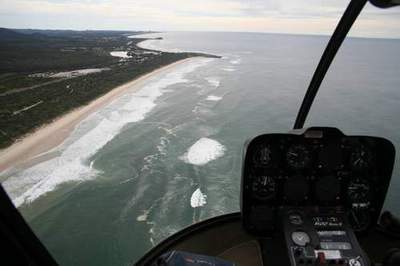 Sometimes missing your flight (or more accurately having Virgin Blue Airlines cancel it) can lead to an interesting change of plans. Last month I was talking about adventure travel at the Byron Bay Writers Festival first thing in the morning and then, in late afternoon, revealing some of my favourite souvenirs at the National Maritime Museum in Sydney. No problem, after my morning talk I’d take the bus to Coolangatta Airport on the Gold Coast (70km, a bit over an hour) and fly down to Sydney (800km, another hour). 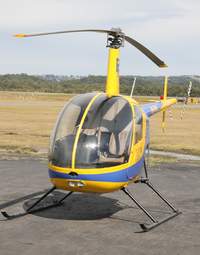 Then Virgin Blue cancelled my flight. I couldn’t take an earlier flight (not enough time to get to Coolangatta Airport) or a later flight (it would arrive in Sydney too late for my talk). We looked at other airlines (Qantas and Jet Star) and other airports (Ballina, which in fact is closer to Byron Bay than Coolangatta). Nothing worked.

A helicopter suggested the National Maritime Museum. So that’s what I did, a little R22 Beta II two-seat helicopter picked me up at the writers festival, we zipped up the coast and I made the earlier flight with five minutes to spare.

It’s almost one continuous strip of sand from Byron Bay to Tweed Heads and if you were out walking on the beach or surfing one of the breaks that morning I waved to you. No whales, though, the pilot saw one on the way down.

That evening a dramatic storm blew in over Sydney, from the Maritime Museum the sky over the city was a dark grey, but the buildings were brightly lit by the setting sun.