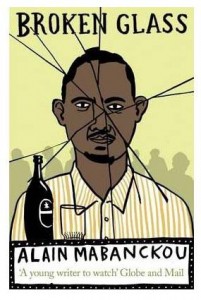 Alain Mabanckou teaches French literature at UCLA and is the author of a dozen novels and books of poetry in French. This one has been translated into English and follows the misadventures of an alcoholic school-teacher nicknamed Broken Glass drifting through life at the Credit Gone West bar in Brazzaville in the Republic of Congo. The dive’s owner, the Stubbon Snail, encourages him to record the stories of the bar’s collection of equally lost drinkers, dreamers and misfits.

Their often chaotic and decidedly disaster-prone lives emerge in stream of consciousness takes without a single period/full stop from beginning to end and a distinct shortage of capital letters. You’d need to be familiar with French literature (African too for that matter) to really appreciate the literary references, although right at the end a character named Holden drops by the bar, boasting about having been to America and toting a book titled something ‘in the rye.’

The book kicks off with the President chasing his advisors to find a slogan or statement he can roll out. They race through a long list of great historical quotes including, naturally, Shakespeare and his ‘to be or not to be, that is the question.’. To which the ‘chief negro’ responds ‘no, no good, we’ve got past wondering whether we are or whether we aren’t, we’ve already settled that one, we’ve been in power here for twenty-three years, next!’