Brazilians certainly believe in eating – and drinking – my recent Brazil visit included plenty of both. 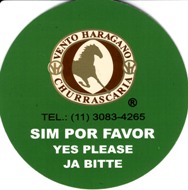 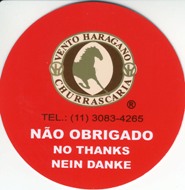 Vento Haragano is one São Paulo’s biggest (and priciest) churrascaria places, this is the Argentinian meat, meat and more meat diet. A veritable stampede of gaucho waiters race around the restaurant toting mighty chunks of meat and flashing sharp knives. You display a little flip card on the table beside your plate and as long as it’s showing green more and more meat will pile up on your plate. 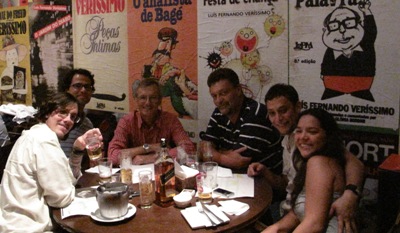 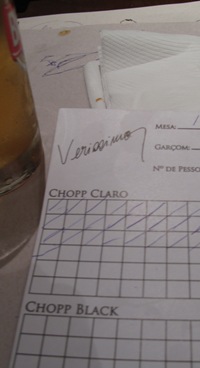 Verissimo is named after the popular Brazilian author Luis Fernando Verissimo, and here it’s the beer which appears in tankard after tankard (chopp is Brazilian draught beer) every time your current glass looks like emptying. The waiter adds another tick on your scorecard with each refill and, as you can see, you get through a bit. 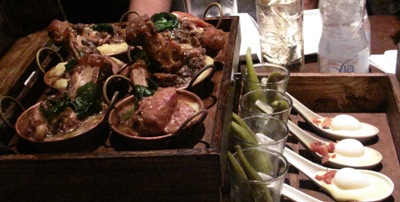 The restaurant and bar won the the best ‘Petisco’ on the Best Boteco Competition 2009. The champion – according to a website – is the snack called Pirulito de Rabada no Caixote (oxtail meat immersed in a pan with polenta, Tuscan sausage and crispy watercress, accompanied by pickled okra and colored quail egg).  It’s served up in a little cabinet, flip open the lid to reveal the oxtails, slide out the drawer for the quail eggs.