I’m about to head off to Laos to work on a new Lonely Planet TV program in our forthcoming ‘Lonely Planet’s Roads Less Travelled’ series. So, naturally, I’m reading up on Laos books and, surprisingly, there isn’t a great deal. If you can find a copy of Murray Laurence’s long out of print High Times in the Middle of Nowhere his account of travelling in the country in 1974 –This is Your Last Airplane – is hilarious. Maureen and I were there at almost exactly the same time working on the very first edition of Southeast Asia on a Shoestring. 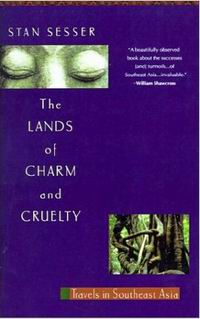 Stan Sesser’s The Lands of Charm & Cruelty is more recent (late ‘80s, early ‘90s) and in print. His journalistic account of the region covers Laos as The Forgotten Country, which was pretty much the way it was. He also has an excellent chapter covering how unpleasant things can become for you if you dare to run against the government in Singapore, The Prisoner in the Theme Park.