At last count I’ve written or contributed substantially to more than 30 Lonely Planet books. Of course with some of them I may have only been one of a team of writers while others may have been all mine once upon a time (Australia, New Zealand, Sri Lanka, Burma, Papua New Guinea and South-East Asia on a Shoestring to name a few) but now have many other writers working on them. Here are some recent Lonely Planet projects I’ve been involved with: 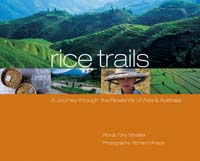 Buy this book
Rice was a keystone in the 1960s ‘green revolution,’ the great leap forward which banished the centuries old spectre of famine in Asia. Photographer Richard I’Anson and I tracked down fascinating story as we travelled around Asia.

Falkland Islands & South Georgia
Buy this book
I’d always been fascinated by the Falklands and after Maureen and I made an Antarctic trip in 1997 I developed an interest in South Georgia as well. With its huge populations of seals, penguins and other seabirds South Georgia is for many visitors the number one Antarctic attraction. I managed to join a trip attempting to follow Shackleton’s path across the island to produce this small book on this amazing region of the world. 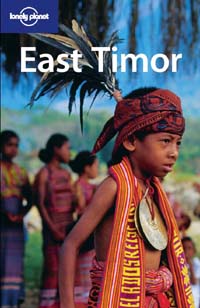 East Timor
Buy this book
I’ve visited East Timor in all three of its incarnations – the Portuguese colony, the Indonesian province and now the independent nation. After the violence accompanying the independence struggle it’s a delight to find East Timor is beginning to attract intrepid visitors and I was able to explore the new nation from its great scuba diving to its highest mountain.

The Travel Book
Buy this book
Every country on earth in one not-so-handy volume, this is not a book you tote around with you but if you want some armchair inspiration it’s perfect. The 13 ‘little countries’ which pop up at the end are my work plus some of my photographs are scattered through the book, particularly in North Korea where they’re all mine! 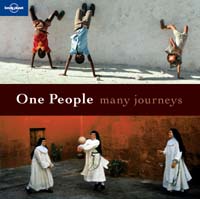 One People – Many Journeys
Buy this book
One People is a celebration of the connection between people all over the world with a series of essays and accompanying photographs following human life from birth to death, reflection to festivals, home to work. Maureen wrote the introduction and I did the essay on Work.