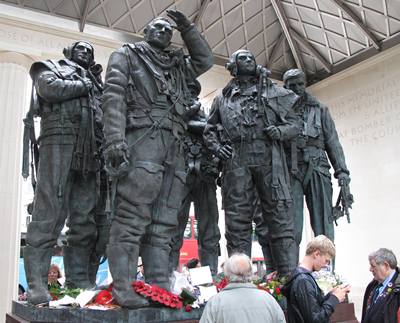 Although there are all sorts of World War II memorials around London until 28 June 2012 there was no memorial to the Royal Air Force’s Bomber Command. Even though the chances of being killed were higher than in any other group, of the 125,000 aircrew in Bomber Command during the war over 55,000 would die. The debate over the bombing of Germany in WW II was probably a major factor in the long delay in creating a memorial. It’s been estimated that more than 300,000, perhaps more than half a million, German civilians died from bombing raids. The destruction of Dresden over two nights in February 1945 was one of the most controversial, I visited Dresden while travelling around German last month. The Bomber Command memorial is in Green Park, near Hyde Park Corner..