Bogota
I started and ended my Colombian travels in Bogota, the country’s capital, and on my last morning climbed up to the top of Cerro de Monserrate, the hilltop viewpoint overlooking the sprawling city. Bogota’s a lofty place, at 2600 metres (8500 feet) it’s at twice the altitude of Kathmandu. So the 600 metre climb to 3200 metres can leave you a little breathless. Never mind, the view is superb. 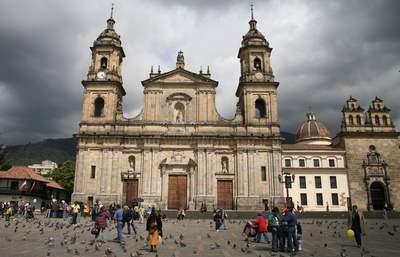 La Candelaria
The old colonial centre of Bogota is a great place for restaurants and bars, museums and galleries, emerald dealers and internet cafes, hotels and hostels. The Plaza de Bolivar, with its obligatory statue of the South American hero Simón Bolívar and overlooked by the looming bulk of the Cathedral, is Candelaria’s centrepiece. 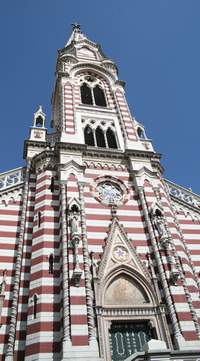 Colonial Bogota
Caldelaria is packed with churches and museums, although it’s much more modern (constructed in 1938) the Iglesia del Carmen is probably the most colourful. Naturally there’s a museum of religious art and an art gallery dedicated to Botero, in fact it houses the popular Colombian’s own collection of international artists as well as his own work.