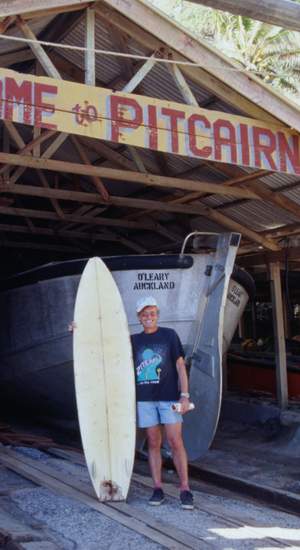 Bligh’s Third Mutiny
I’ve had a long interest in William Bligh, the good ship HMS Bounty and the most famous mutiny in naval history. It’s partly because of the many places I’ve been to which have a connection with Bligh, the Bounty, chief mutineer Fletcher Christian or other players in the famous drama. I wrote about my Bounty connections for the British newspaper The Observer last week.

When I visited Pitcairn Island, final destination of Fletcher Christian and the other Bounty mutineers, in 1998 I posed outside the islanders’ boathouse with this surfboard, left by some earlier visitor.

Bligh played a part in two other mutinies, one of them in 1805 when he was governor of the British colony of New South Wales. Until 27 April 2008 there’s an interesting exhibit about his Sydney mutiny at the State Library of New South Wales in Sydney.

Bangledesh Boat Breaking
Sitakunda on the Bay of Bengal in Bangladesh is the final port of call for many oil tankers and other vessels which have reached their ultimate use-by-date. At high tide they’re driven on to the beach at full speed and in the following months a swarm of Bangladeshi workers dismantle, cut apart and recycle entire ships until nothing is left on the sand but an oily stain.