▲ This morning I finally got around to riding the London Eye, London’s iconic giant ferris wheel, just downriver from Big Ben and the Houses of Parliament. With a diameter of 135metres it’s big, but not the biggest of the world’s giant ferris wheels. The London Eye opened in 2000 and for the next six years was the world’s number one. From 1920 to 1985 that honour went to the Riesenrad, the 65metre wheel in Vienna’s Prater park. The Riesenrad dates from 1897, but there was a bigger wheel in Paris from 1900 until 1920 when it was demolished. 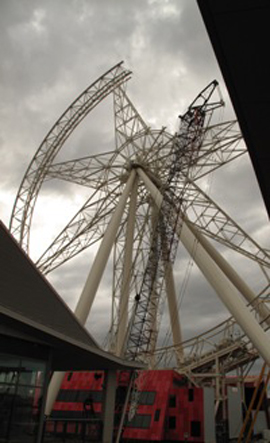 ▲ The honour for world’s biggest ferris wheel today goes, by a narrow 5m advantage, to the 165m (540 feet) Singapore Flyer. I saw that (but didn’t ride it) a few weeks ago when I was in Singapore, it overlooks the Singapore Grand Prix track.

◄  I’d made a Singapore stopover between Melbourne and London. Melbourne was briefly home to the biggest wheel in the southern hemisphere, the 120m Southern Star. Melbourne’s unfortunate big wheel stands close to the Lonely Planet head office and opened for business on my birthday last year. One month later, in January 2009, it ground to a halt and that’s how it looked just before I left Melbourne – partially dismantled. The wheel had started to crack up, a failure blamed on its (Japanese – Sanoyas Hishino Meisho) design. There’s no date set yet for its restart.