My alarm’s set for 5.30am in order to get to Cambodia before dark. It’s pissing down with rain (and this is the dry season and in a drought) as I ride the Skytrain, Bangok’s elevated ‘subway’ system, to the bus terminal. An hour out of Bangkok I’m regretting my backpack is in the bus’s locker: inside the bus the air-con is set to the usual freezing level and I’d really like to have a sweater on. 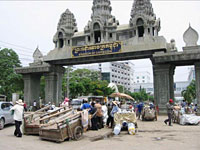 From Aranya Prathet it’s a tuk tuk ride to the border at Poipet, which looks completely disorganised but in fact works pretty smoothly, especially the visa-issuing process. Poipet is a combination of mud, shanty town and glossy casinos. The border town has become a major getaway for Thai gamblers. 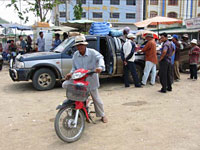 I soon find a twin-cab pickup truck heading for Battambang, but there’s the usual process of gathering more passengers and cargo before we finally set off. Then we drive around town and find more and more passengers, until there are four, five, six, seven and finally eight of us squeezed into the cabs, the pickup tray full of bags of oranges and vegetables (and my backpack), plus at least another eight people. (It could be more – it’s hard to see out.)

.
Finally, just as we hit the road, the driver announces he isn’t going to Battambang at all, only as far as Sisophon, but he’ll find someone to hand me over to. Then we dodge potholes and the surprisingly heavy oncoming traffic for an hour to Sisophon where, as promised, he does hand me over to another vehicle.

We climb on board, eight inside again, but then we climb out again – clearly that was just trying it on for size. It doesn’t look like we’re going to go for a while, since there’s room for another 10 or 12 in the back. At this point somebody with a car pulls up, spots me and says he’ll leave for Battambang immediately. Hell, it’s only a few dollars. I forfeit my first fare, climb in the front seat and ride off to Batttambang in comfort. Even the road is much smoother.