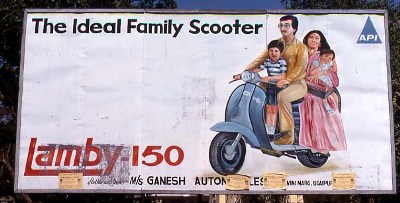 It will be years before the millions of Bajaj scooters on the roads of India all disappear, but in March 2010 the last scooter will roll off the Bajaj production line. The company intends to concentrate on motorcycle manufacture with the aim of overtaking Honda as India’s most popular motorcycle. It was the two-wheeled vehicle that put Indian families on the road. This billboard photo I took in the 1980s was for a Lamby 500 but it clearly illustrated the concept. Bajaj scooters were originally based on the Italian Vespa design and right to the end they looked very much like a Vespa.