Back to the UAE


In February 2005 we made a short circuit of the Gulf State of Oman, starting and finishing in Dubai in the neighbouring United Arab Emirates. We brought a writer from the New Yorker along for the ride. This is our last day, heading back to the UAE: 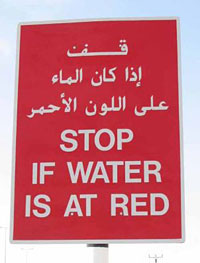 About 100 km before the border a wind started to stream across the desert blowing a steady film of sand across the road. At times the flow was so uniform it looked as if the road had become a beach, at other times it whipped and frothed like whisps of yellow fog drifting across at headlight height. No room in the inn was the message from every hotel we’d called in Dubai… the city’s annual shopping festival was in full swing and, unlikely as it might seem, there are enough international shopaholics to pack the city out. So we were going to stay at a place perched on a mountaintop, Jebel Hafeet, close to the Oman border but only an hour and a half drive from Dubai and our flight to Ethiopia tomorrow evening.

We’d started the day with two more forts: First, the big fort in Nizwa with its huge circular tower and fine views over the town centre. Our second fort was Jabrin, claimed to be one of the best in the country. That’s clearly quite a claim since Oman is overloaded with forts. There are said to be 500 of them.

In Ibri, the final reasonable-size town before the border, I congratulated myself on disposing of all my remaining Omani rials in a fuel station fill up. An hour and a half later at the Oman/United Arab Emirates border I didn’t feel quite so smart when we discovered there was a 2 rial departure tax for leaving Oman. Getting in to Oman had proved much easier than expected but going back to the UAE didn’t prove quite so simple.

‘Where are your visas,’ enquired the immigration official, after we’d backtracked to his roadside window. We’d driven straight by him without noticing and been sent back by the customs office.

‘We don’t need a visa,’ we insisted, reasonably confident that was the truth.

We were then ushered inside, pushed to the front of a long line of German package tourists off a bus, had our retinas scanned (clearly the UAE has the very latest border control equipment) and a few minutes later we were back in the Emirates.

Goodbye Oman, it had been an interesting short visit, we’d remember it for forts (there had been lots of punning about the fortitude you needed to slot in so many fort visits) and wadis (on foot and by 4WD). Plus there had been the constant reminders of the contrast between the media image of the Arab world and the on-the-ground reality: friendliness, welcome and a level of politeness that seems almost forgotten in the hurried western world.