Back to Luang Prabang


Thirty Five years ago Maureen and I made a brief trip through Laos working on the very first edition of Southeast Asia on a Shoestring. Soon after the country disappeared from view as the American supported Royalists crumbled and the Pathet Lao took over. Laos disappeared from the book as well and didn’t reappear until many editions later. Over the years I’ve revisited every country in the region, except Laos. I’ve finally gone back, to work on a TV programme for the forthcoming LPTV series Lonely Planet’s Roads Less Travelled.

Some snapshots from my first couple of days in Luang Prabang follow:

1.       Back in 1974 we used to climb up to the top of Phu Si Hill where, from the stupa topping the hill, we could watch DC4s and DC3s of Royal Air Lao arriving at Luang Prabang Airport. My first view of the city in 2009 was of Phu Si Hill just below the wing of my Bangkok Airways ATR 72. 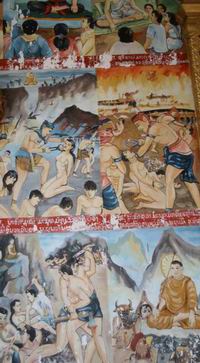 2.       First stop with the film crew was the Wat Ho Siang temple with its worrying scenes of events in Buddhist hell. In fact Buddhist hell looks pretty similar to the Christian version. Luang Prabang’s chief claim to fame is the exceptional number of fine temples with their large population of monks.

3.       Despite Luang Prabang’s current popularity – tourism took off after the town was award UNESCO World Heritage status – it never feels crowded and the fine old French architecture, often beautifully lit at night, makes it a great place to wander. 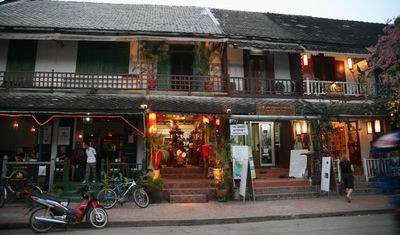 4.       I signed up for a cooking course at the Tamnak Lao/Three Elephants Restaurant. Perhaps the dishes of chicken larp (Lao chicken salad) and kheua sen lon (vermicelli noodles with pork, vegetables and woodear fungus) came out so well (I thought) because I teamed up with Motuko, a Japanese woman who runs a restaurant in a small French town. She did ask if I’d be cooking more at home in future! 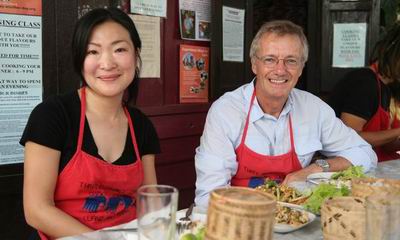 5.       The full moon rises over the Phu Si Hill stupa as I stood in the compound of Wat Xeng Muan where the Magha Puja procession was about to commence. 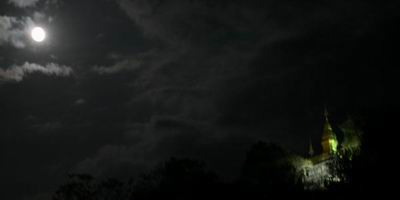 6.       Magha Puja celebrates the coming together of the three core elements of Buddhism – the Buddha himself, the dhamma (his teachings) and the monks (whom he taught). On that February full moon night thousands of years ago 1250 monks turned up, without any summons, to hear the Buddha. At the festival the monks lead a candlelit procession three times around the wat.