Bacchus Marsh & the Avenue of Honour


My last travel blog was on big trees – the giant tingle and karri trees of Western Australia – both native trees. This time it’s an ‘exotic’ (an introduced species), 281 elm trees at Bacchus Marsh in Victoria, a country town about 60km west of Melbourne, towards Adelaide.

The town has been in the news recently because of its ‘Avenue of Honour.’ Back in 1918 281 elm trees were planted to commemorate the town’s WW I participants (280 men, one female nurse), many of whom lost their lives. Today it’s a long (3km) stretch lined by very large elm trees and they want to put a roundabout at about two-thirds distance from the town, as part of a plan to smooth out a nearby stretch of freeway.

Of course this has enraged quite a lot of people, include the town’s favourite son, author Peter Carey. Mr Carey lives in New York, but was in Australia recently for the Sydney Book Festival, talking about his new book Parrot & Olivier in America. It’s a ‘dazzlingly inventive reimagining of Alexis de Tocqueville’s famous journey,’ a visit to America which led to de Tocqueville’s classic book Democracy in America in 1835. 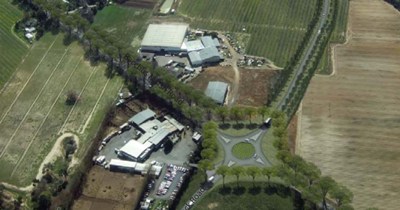 impression of how the new roundabout would look

Cutting down trees is never nice, but the change will divert a lot of heavy truck traffic which currently goes through the town and the plans don’t look too bad to my eyes. I had a chat with the people in the town’s information centre and it looks very difficult to come up with an alternative except at stupendous cost (ie build an underpass in an already marshy, low lying area). So overall I’d vote yes, if I was being asked. Which I’m not! A recent article in the Melbourne newspaper The Age covers both sides of the story from the local angle.