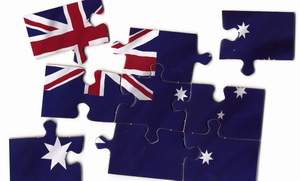 The 26th of January is to Australia as the ‘Fourth of July’ is to the USA or the ‘Quatorze Juillet’ (the 14th July) is to France. It’s a public holiday which celebrates the country’s origins. For five years I’ve made a little trip around the state of Victoria each Australia day as an ‘Australia Day Ambassador,’ it’s a case of meet the mayor, raise the flag, make a quick speech about how Lonely Planet was born in Australia and still calls Australia home, join in the barbecue and move on to the next small town. It’s also been a great opportunity to see corners of my home state I wouldn’t get to otherwise.

This year’s Australia day found me in the Wimmera region in the west of the state. It included visits to the small town of Rainbow with its fine old homestead Yurunga and the murals which dot the town. Sheffield in Tasmania has made a major tourist attraction out of its murals, add a few more and Rainbow could do the same.

From there I carried on to Jeparit, birthplace of Australia’s longest serving prime minister, Robert Menzies. I was able to claim that in the last year I’d also visited the hometown of a rather more notorious 20th century world leader: Gori in Georgia, birthplace of ‘Georgian Joe’ Stalin. Jeparit has been badly hit by the drought which is still drying out south-eastern Australia, a local photographer lined up the small town’s citizens beside the miserable remnants of the once beautiful Wimmera River to highlight the problems the town faces.

The sorry Wimmera River in Jeparit

My Australia day travels also took me to Dimboola and Nhill, the ‘duck capital’ of Australia – the annual Duck & Jazz Festival (eat duck, listen to jazz) kicks off from 15-17 February this year. En route to the Wimmera I also detoured to have a look at Mt Arapiles, the rock climbing capital of Australia. Climbing enthusiasts flock here from all over the world to test themselves against climbs like Cruel Britannia, Punks in the Gym or Vanya is a Dog.

On the way back to Melbourne I made another detour to visit Redesdale near Bendigo. Redesdale’s Mia Mia bridge has an interesting history because it should be just up the Yarra River from my home in Melbourne. Except the ship bringing the bridgeworks out from England in 1859 sunk within sight of Melbourne and they had to start all over again with my local bridge. Nearly 10 years later they salvaged the original bridge and plonked it down at Redesdale, 150km from where it should have been.