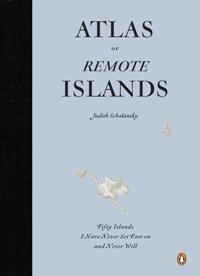 Judith Schalansky’s book was originally published in German and won design awards. It’s a delight, a weird and wonderful assortment subtitled ‘Fifty Islands I Have Never Set Foot On and Never Will.’ Each features a map and a short and often intriguing essay which might not even relate that much to the island in question.

Like the sad story of Scott Moorman who disappeared off Hawaii with four friends in a small fishing boat caught in a storm in 1979. Nine years later his missing boat is found washed up on uninhabited Taongi Atoll, 3750km away in the Marshall Islands. The skeleton buried nearby is Scott Moorman, but how did his boat the Sarah Joe get there, who buried him and what happened to the other four crew members?

Many of the islands are uninhabited, some of them are reasonably easily accessible, many of them are not. I’ve been to five of them: Rapa Iti (in the Austral group of French Polynesia), Robinson Crusoe Island (off Chile), Easter Island (even further off Chile), Pitcairn Island (keep travelling west) and Deception Island (Antarctica). Quite a few others I’d like to visit one day. My checklist for ‘been everywhere’ is Cathay Pacific pilot Rowland Burley, he says he’s put ticks beside 13 of them.