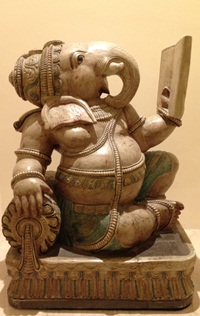 In recent weeks I’ve stayed at two favourite hotels, both of them with a heavy emphasis on art. The Imperial Hotel is a stone’s throw from Connaught Place, the centre of India’s capital New Delhi. It’s a throwback to the old Raj era and it’s simply packed with art from that period, whether it’s the fantasy colonial era image of India above.

Or this delightful bookish statue of Ganesh, the elephant-headed son of Shiva and Parvati and patron of letters and learning. ► 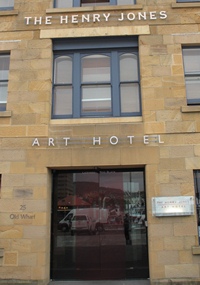 In Hobart, capital of Australia’s island state of Tasmania, we stayed at the Henry Jones Art Hotel on the waterfront. Here the art is all modern as tomorrow, a useful place to stay before heading out on the ferry to MONA, David Walsh’s iconic Museum of Old & New Art which has quickly become the number one reason for travelling to Tasmania.