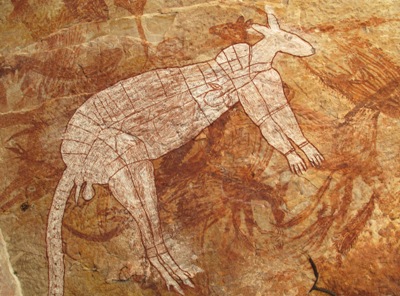 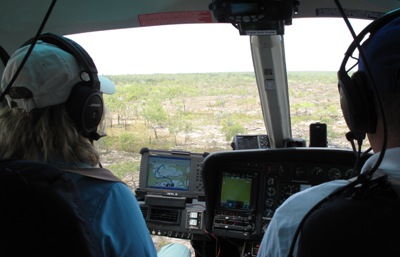 ▲ Getting to these remote sites – a couple of hundred km east of the town of Katherine in a completely uninhabited area – is only readily possible by helicopter. During the dry season they could be reached by 4WD, but count on at least a day of tough driving.

▲  Discovered in 2006 the Gabarnmang Cave houses the biggest collection of this art The roof is extensively painted and although Arnhem Land paintings could be amongst the oldest rock paintings on earth they’re also superb art. I particularly liked the yellow fish in this group of animal paintings. 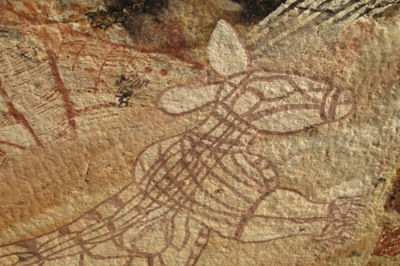 ▲  And this muscular looking kangaroo. 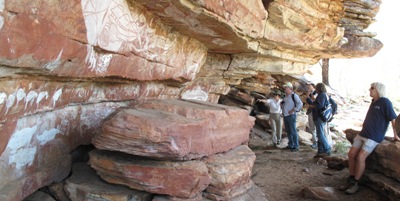 ▲  Gabarnmang was a large, flat roofed, shallow cave while the ‘Boat Cave’ site was a narrow slash across a rock face. 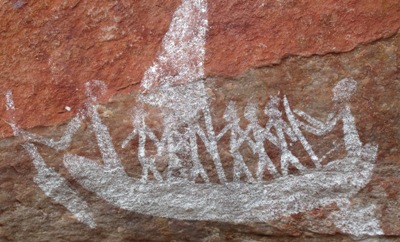 ▲  Some of the rock art we visited could be many thousands of years old, but pictures at the Boat Cave site show much more recent history. Presumably this sailing boat painting is a record of contact with Indonesian visitors from the islands to the north.

▲  But when did this curious boat with its line of top-hatted gentlemen (one of them puffing on a cigar?) appear?

▲  The same site also illustrates an animal which is clearly a thylacine, a Tasmanian tiger. The last known Tassie tiger died in Hobart Zoo in 1936 and despite countless ‘sightings’ thylacines have never been seen again. When were they last found on the Australian mainland and in the Northern Territory? 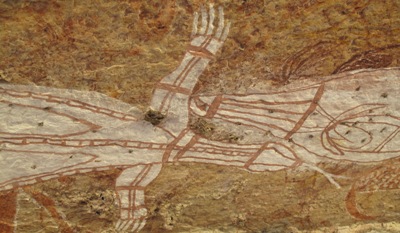 ▲  The art work at the sites was in a wide variety of styles, like this X-ray goanna and fish at the Boat Cave site. 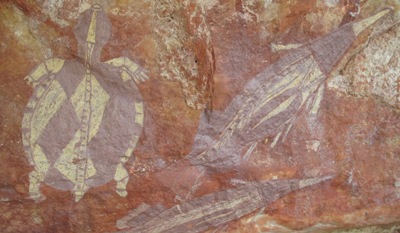 ▲  Or the turtle and fishes at a site I dubbed the ‘Arrow Site’ after the rocks laid out on the ground beside one of the site caves. 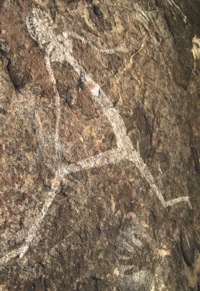 ◄  At the same site was this ‘dynamic figure,’ the definition applied to artwork showing figures in action, in this case a running man. Below the figure is a hand stencil painting, another typical Aboriginal art style. 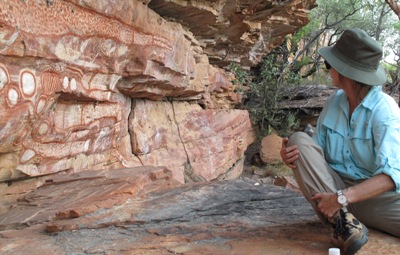 ▲  The Sugar Bags site illustrated the components and parts of a bee hive. 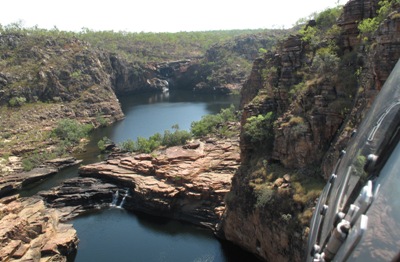 ▲  Our Arnhem Land travels took us from one site to another, but in two days we only touched on a handful of the 4000 art sites that have been recorded. This huge area is virtually uninhabited and there are currently no organised visits to these amazing sights. Apart from visits like ours these sites have probably been seen by only a handful of independent visitors. Yet this area of Arnhem Land is packed with beautiful gorges, waterholes, waterfalls and rivers. Even at our visit, right at the end of the dry season, with the first wet season falls just starting to green the land, there was still a large amount of water around.

▲  One day I can imagine remote tourist camps from where visitors could get to the art sites. And to beautiful waterholes like this one where we made a lunch stop. A small cave above our swimming hole featured a fine rainbow serpent painting.