Three years ago, on a visit to Galway in Ireland, I drove up the coast to the place where in 1919 pioneer aviators John Alcock and Arthur Brown touched down on the first ever trans-Atlantic flight. Soon afterwards I had a look at their ungainly Vickers Vimy biplane in the Science Museum in London. ▼ 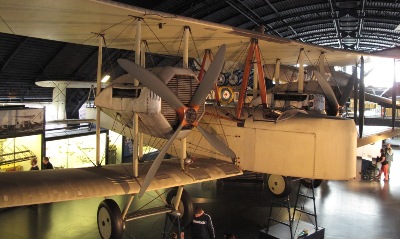 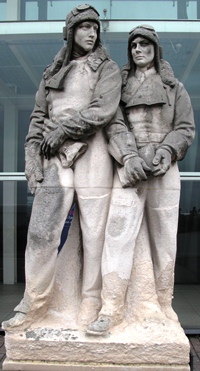 ◄ For years I remember a statue of Alcock and Brown which used to stand near the tunnel exit as you drove in to London Heathrow Airport Terminals 1, 2 and 3 in the centre of the airport. Then it disappeared although in fact it hasn’t gone far. I tracked it down last week to its new position outside the Heathrow Academy on the airport perimeter road, Newall Rd. Not far from the tunnel entrance. From their new position they have a good view of aircraft arriving and departing Heathrow and in fact it’s a prime position for aircraft spotters, you’ll see them with their binoculars and cameras. Tomorrow I’ll post my thoughts on two Atlantic crossings I made last week.