I’m in Alaska travelling with an LPTV film crew making a program for the forthcoming Roads Less Travelled series with National Geographic. I’ve been east and north-west from Anchorage, now I’m heading directly west to the Kenai Peninsula to try clam digging, sailing and sea kayaking with sea otters.

I start with a spell of clam digging, the beaches around Clam Gulch and Ninilchik are home to huge (and tasty) razor clams. The best time to go razor clam hunting is when you get an ultra low tide with a full or new moon. Which just happens to be the day I’m at Clam Gulch. So I get a fishing licence (which lets me get 30 clams, or was it 60? A lot anyway, the bear shooting licence only allows 1, or was it 2?) 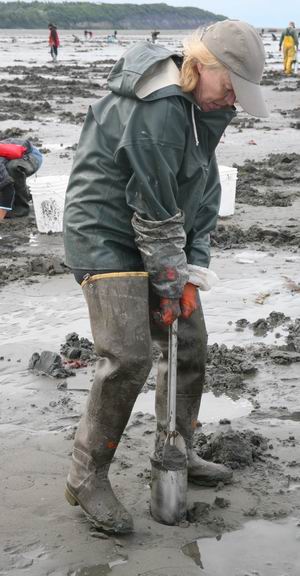 With my clam gun in hand I head out to the beach and soon have the skill fairly well mastered. You find the little dimple in the sand which indicates the presence of a clam directly below. Thrust your ‘gun,’ actually a hollow tube, down over the dimple and the cylinder you extract should contain a razor clam. OK, I cracked a few clam shells, but they still tasted good. 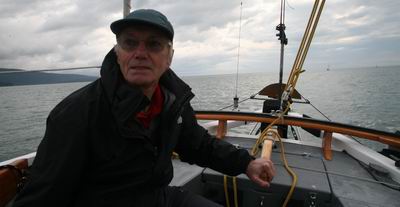 At Homer I joined Ron’s fine Bristol Channel cutter Morning Star for a little race around Kachemak Bay. In Alaskan summertime fashion we don’t start until after 8pm (my fault, late arriving after all that clam hunting) and it’s after 10pm by the time we finish. Still light of course.

The next day I whisk across the bay to the interesting little port of Seldovia to go sea kayaking and look for sea otters. They’re about the cutest creatures imaginable, they like to float on their backs, eyeing you quizzically or, like this one, enjoying a crab using its chest as a dining table. 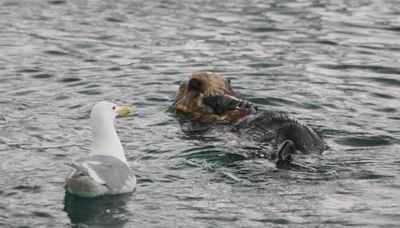 Sea otter eating a crab, a seagull waits for scraps 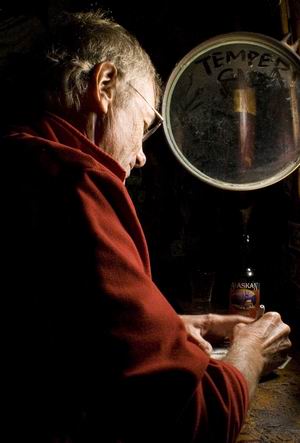 Then it’s back to Homer and a visit to the town’s popular (at least with tourists) Salty Dawg bar. After losing (narrowly) a game of pool I followed the local practice of leaving a signed dollar bill pinned to the wall – or ceiling in my case, I signed it Lonely Planet.