Love them and hate them – I’ve listed LAX (Los Angeles International) and CDG (Paris Charles de Gaulle) as my least favourite airports in the first world. On the other hand LHR (London Heathrow), SIN (Singapore Changi) and MEL (Melbourne Tullamarine) are all OK by me and a couple of days ago I flew LHR-SIN-MEL on a Qantas A380, the double-decker airbus. En route we flew right over Afghanistan, as usual, and (also as usual) there were great views out the windows and from the A380’s tail mounted Skycam.  ▼

Singapore’s Changi airport is everybody’s favourite, it consistently wins ‘best airport in the world’ awards and surveys. But Changi does have one major drawback: its security system. Most airports put you through security when you go from ‘landside’ to ‘airside’ and enter the departure area. Changi puts your through security as you go into the departure gate for your particular flight. This means you’re then trapped in the departure gate area or you’re doing a last minute rush to get there. And if a departure gate X-ray machine fails, it does happen sometimes and there are usually just two of them, then you’ve got a real problem. 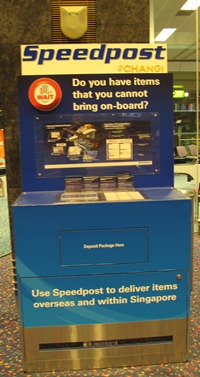 Plus it can present a real problem for transit passengers toting duty free liquids. If I’d bought a bottle of duty free Scotch in London it would have been confiscated and dumped at Changi because you can’t go through security with containers with more than 100 ml of liquids. A litre of Johnnie Walker definitely isn’t going to make it.

◄  These Speedpost mailboxes which have appeared around Changi indicate that this is a problem lots of people must face. Unfortunately it’s probably going to cost as much to mail your bottle of Johnnie Walker home as it cost in the first place!

▲ Finally we flew on to Melbourne in Australia, here’s the pre-dawn approach into Tullamarine Airport. Now it often seems to take a long time for bags to come through at Melbourne and Tuesday 7 August was one of those off days, it took so long they even began to apologise about it – although they never explained why it was taking so long. My bag finally turned up 38 minutes after we’d stopped at the gate. Yeah I know I’m a geek, I time these things. But in fact leaving this delayed arrival out, the average wait over my last 10 international flights into Melbourne has been 19 minutes. The average into London Heathrow has been 27 minutes and that’s leaving out a 64 minute wait after a Singapore Airlines flight two years ago when the cargo door on the A380 jammed shut.

Where Melbourne Airport (and other Australian airports) can be horribly slow is when customs decide they want to X-ray your baggage to see if you’re smuggling in cheese or something else stupid. I had an interminable wait after I arrived on a flight from Bali last year. It’s the sort of ‘first experience’ hassle which can really put people off a place and there were certainly a bunch of people very unimpressed with Australia on that 11 October 2011 Tullamarine morning.