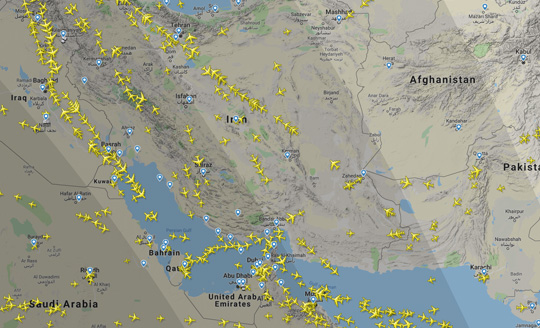 ▲ A FlightRadar24 snapshot of the air traffic over Iraq and Iran on 23 May 2019. For a time Iraq was looked upon as being unsafe and everything went over Iran. Today airlines fly over both countries, but not much is going over Afghanistan in the image above, not because of any perceived danger there, but because of the India-Pakistan unrest further east.

On 14 March 2019 I commented about the empty skies over Pakistan as flight routes were shut down due to the India-Pakistan contretemps, Mr Modi throwing his weight around. On 5 March 2019 I flew London to Singapore and we skirted around Pakistan, flying south-east across Iran and then changing direction once we’d cleared Pakistan airspace.

But check this South China Morning Post article from 1 October 2018 for an interesting run down on the problems of flying over other countries. Often you just pay for it and the story shows how it adds up to €1572 to fly an A320 across six countries from Barcelona in Spain to Copenhagen in Denmark. There are some strange charges, Air China has to pay the USA for flights from Beijing in China to Auckland in New Zealand even though the flight doesn’t go anywhere near the US. The US, however, controls the airspace over most of the North Pacific and charges airlines who cross that ocean.

But sometimes you are simply not allowed to fly over a country for political reasons – El Al, the Israeli airline, can’t fly across Saudi Arabia for example or China Airlines (that’s Taiwan, Air China is the airline of China) can’t cross China. To or from Europe China Airlines flights are routed north or south around China which can add two to five hours compared to the same flight for a European airline like KLM which can fly straight across China. The meltdown in Middle East relations between Qatar and Saudi Arabia means Qatar have to make a big diversion to get to destinations in Africa, going the other direction, to Australia for example, is no problem.

Then there are places where it’s simply not safe to fly. I blogged about flying over war zones on 9 July 2014, so just a week before Putin shot down Malaysia Airlines flight MH17 over Ukraine. A few weeks later on 2 August 2014 I commented about avoiding flying over war zones and how airlines heading to or from the Gulf cities (Abu Dhabi or Dubai for example) were now flying over Iran because Iraq was considered unsafe. I had more to say on that a week later on 9 August 2014.

Flying over Iran can provide some wonderful views, as I saw in late in 2018 when I spotted Iran’s snow-capped Mt Damavand while on a flight from Dubai in the UAE to Baku in Azerbaijan. 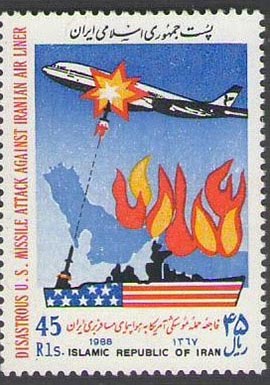 But now the USA is making noises about why airlines should not fly over Iran because of safety concerns. Surely it’s not because there are often 1000 flights a day over Iran which according to The Washington Institute can contribute US$800 million a year to the Iranian economy, certainly some of it being contributed by US citizens on flights like Chicago to Dubai or New York to Abu Dhabi? Of course the big danger to airliners in the region might be the USA rather than Iran, although fortunately trigger happy US Navy Captain William C Rogers III is now 80 years old and long retired. In 1988 he managed to shoot down an Airbus A300 with 290 passengers and crew. Ronald Reagan did apologise and the USA paid US$62 million for the ‘mistake,’ unlike Putin – who hasn’t paid a rouble for killing 298 people on MH17.