The airport has a huge terminal building, most of which is completely empty because the aircraft operated into Mandalay are too small for the airbridges. As a result the entire upstairs of the terminal, at the airbridge level, is more or less empty. Passengers are squeezed into a small departure area downstairs. From which they have to take a bus to their flight because the apron is so huge and the aircraft are parked so far from the terminal building.

A six lane highway is under construction to link Mandalay via the airport to the new ‘royal’ capital of Nay Pyi Taw – another somewhat less than sensible construction. It’s what you get when you let the army run a country. 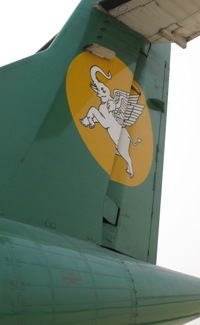 When I first started visiting Burma back in the ‘70s it was a wise idea to avoid flying anywhere. Ground transport may not have been too comfortable, but flying with Burma Airways was a very risky operation. Back then Burma Airways competed with Aeroflot and Indian Airlines as the world’s scariest airline. In its new incarnation as Myanma Airways it’s still nobody’s favourite, but today there are three other alternatives. All three of them operate ATR-72s on domestic routes. I flew Yangon Airways while I was in Burma this trip.

Many visitors try to avoid flying with Air Bagan because of its owner’s questionable relationship with the military. Tay Za made his money – according to Wikipedia – from getting a free entry ticket to teak forests and acting as a middle man between Russian arms dealers and the military. He hasn’t only spent the money on setting up an airline, there are also hotels, other businesses and, if you pass his house in Rangoon, a collection of European cars including this bright yellow Lamborghini. Very useful on Burma’s roads. At night the driveways are brightly lit so passers by can admire his collection!