You can always discover another way things can go wrong with the logistics of flying. We’re in Kashgar in the far west of China and checking in to fly Kashgar-Urumqi (everything to the far western side of China goes through Urumqi) and on to Guangzhou. From there we’ll connect to a flight to Europe. My booking has the agency reservation number (X9LFHY) and then a confirmation number for each of the airlines involved (NB2DXY for these China Southern Airlines flights) and finally an E-ticket number for each of the sectors, starting with 7842061655487C1 for the first sector, Kashgar-Urumqi, continuing through to C4 for the last China Southern sector from Paris to London (which in fact is a code-share flight with Air France).

In fact my original agency reservations print out didn’t have that final level of detail, the E-ticket numbers, but knowing how often things can go dramatically wrong in China I’d emailed the office in London from Kashgar and asked them to send the numbers. So we get to check in, our boarding passes are spat out and my two are fine, Maureen’s two don’t have an E-ticket number and without the number – even with a boarding pass – we aren’t flying. Checking the reservation print outs again we realise mine has 4 E-ticket numbers, Maureen’s only has 2. A fraught 1-1/2 hours later I pay US$785 for new tickets for Maureen to Urumqi and on to Guangzhou.

We got a refund when we got back to London, but the lesson? I’ve never had a flight before where more than the airline confirmation number was needed, but in future I’ll always ensure there’s an E-ticket number for every sector. 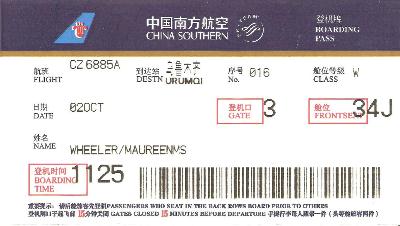 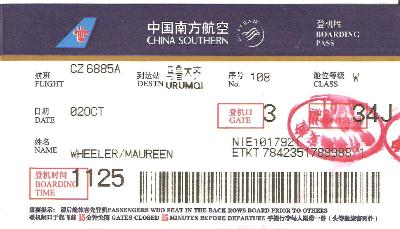 Another Screw Up? Baggage Tags
We were flying Prague-Vienna-Paris with Austrian Airline and at check in the baggage tag was put on a tension strap rather than a handle. Presumably the tension strap disconnected and the tag fell off. Finally, a week later, Air France, the baggage handling agent, announced that it was unlikely ever to be found and we should put in an insurance claim. At this point I ring Austrian Airlines and it’s found it in five minutes, sitting in lost luggage back in Vienna. One lesson here is to ignore the handling agent and go straight to the airline, but Austrian Airlines had waited a week without thinking about doing something despite having all my contact details on the baggage tag.

The lesson? Make sure the baggage tag is attached to something solid.

And Check the Baggage Tag
Again it’s some time back and today computers probably work better. I’m on a QF (Qantas) flight and then an LA (Lan Chile) flight. The check in agent, used to United Airlines (UA) but not to Lan Chile (LA) tags the bag UA, followed by the correct flight number. When I change flights nobody thinks ‘hmm right flight number, wrong airline code.’ Nobody thinks ‘the destination sounds OK.’ And nobody thinks ‘ask the passenger where he’s going.’ No my bag is yanked off and doesn’t make the flight. It takes over a week to catch up with me. On Easter Island.

The lesson? Check your baggage tag, does it send your bag to the right place? Does it have the right flight numbers?

The Biggest Lesson?
Never trust a travel agent. Or an airline. Or a check in agent. Double check everything yourself.