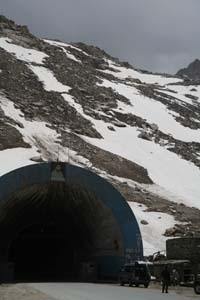 My third and final excursion from Kabul is up to Mazar-i-Sharif, the northern centre close to the border with the northern ‘stans’ which were once part of the USSR. Back in 1972 Maureen and I drove through Afghanistan via Herat, Kandahar and Kabul so we never went to Mazar. It’s just over 400km to Mazar and a good part of it is getting clear of Kabul. Once we’re through the Salang Tunnel, the 4km long tunnel bit with Russian aid back in the late ‘50s and early ‘60s, we zip along at 100 kph. There’s still snow around the tunnel exit on the northern side. 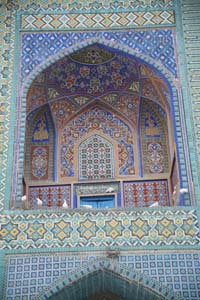 Mazar has a single major attraction, the Shrine of Hazrat Ali. Ali is the Prophet Mohammed’s son-in-law and a main player in the great split between Shiite and Sunni Muslims, the Shiites believe he is the true successor to the prophet, the Sunnis disagree. Both sides do, generally, agree that Ali is buried in Najaf in Iraq, but somehow an alternative theory developed that he’s here in Afghanistan. Either way it’s an important site, beautiful and peaceful in the evening glow and home to a famous flock of white pigeons.

Neighbouring Balkh is the region’s other big attraction. Today it’s just a village but it was a great Buddhist centre two milleniums ago and already dubbed ‘the mother of cities’ when Islam arrived on the scene. Genghis Khan put an end to that and when Marco Polo stopped by there were only ruins to impress him. The remains of the city’s great mud walls still stretch for 10km. 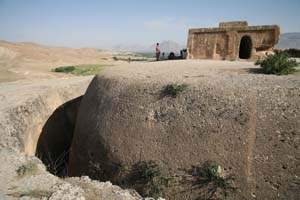 There are a number of stops on the way back to Kabul, but the one that knocks me out is Takht-e-Rustam a Buddhist complex featuring a cave monastery and a rock-cut stupa. It’s the stupa which really surprises me, I thought I knew my way around the stupas of Asia but I have never even seen a photograph of this two millenium old rock dome. Well here’s something too solid for even the Taliban to damage. Clearly it has similarities to the temples of Ajanta and Ellora in India, also cut out of solid rock, but the place it really reminds me of is Lalibela in Ethiopia where you also can stand at surface level and look down at the marvel at your feet. 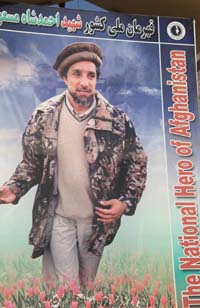 The other side of the Salang Tunnel we diverge up the Panjshir Valley to visit the tomb (a grand mausoleum is under construction) of Ahmed Shah Massoud, the ‘hero of Afghanistan.’ The ‘Lion of Panjshir’ kept the Russians at bay and guarded the only region of Afghanistan not to fall to the Taliban until, just two days before September 11, he was assassinated by Taliban suicide bombers using a booby trapped video camera.