Australia Day on 26 January is Australia’s equivalent of the USA’s 4th of July or France’s Bastille Day (there isn’t a UK equivalent). I go some- where in the state of Victoria every year as part of the ‘Australia Day Ambassador’ program and this year I went to Mildura, on the Murray River up in the north-west corner of the state.

It’s a standard pattern, the Lions Club puts on a barbecue, the flag gets raised, the national anthem is sung, the local mayor and I make speeches, the brass band (and a local rock band) play, a dozen people (in Mildura) are awarded Australian citizenship, hard working local volunteers are commended. It’s all good! 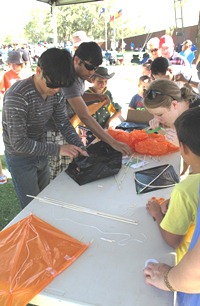 ◄  Plus there are peripheral activities before and after the ceremonies and Mildura had one that I loved. Many refugees have settled in Mildura in recent years and a group of young guys from the Mildura Afghan community set up a table to show the kids how to make and fly kites.

It was perfect, anybody who has been to Afghanistan – and I’ve been lucky enough to go there back in the 1970s and again in 2006 – will know how important kite flying is in Afghanistan. In the kite flying season the Afghan skies are alive with kites. 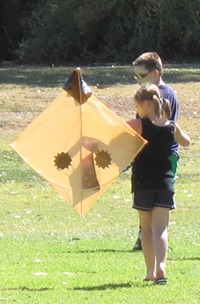 The Kite Runner was a best-selling book on Afghanistan. I mentioned it in a blog I put up on two interesting Afghan-related books a year ago.

As the Australia day event in Mildura wound down happy kids departed toting their Afghan-designed kites. ►

I went on to have a look around Mildura, including a visit to Rio Vista, the 1889 home of W B Chaffey, the Canadian born irrigation engineer who can claim to be the founding figure of the modern town. ▼ 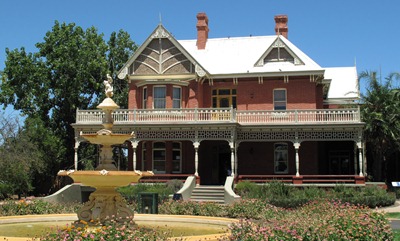