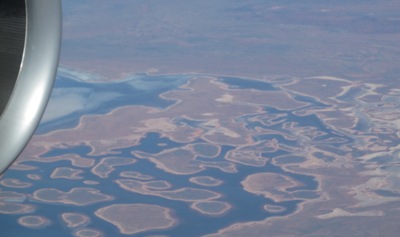 I’ve quoted that Joan Didion line before, that ‘the most beautiful things I had ever seen had all been seen from airplanes.’ And flying Melbourne-Singapore in a Singapore Airlines Airbus A380 a couple of weeks ago I was reminded how true that can be. Crossing Australia there was this magical view of salt lakes near the Northern Territory-Western Australia border. 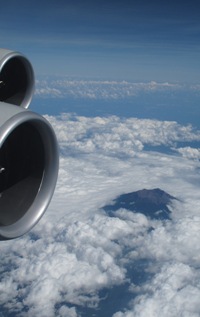 A few hours later there were some magical views of Bali and then, as we tracked across the eastern end of the island of Java a string of volcanoes, I think this one might have been Gunung Raung.

Recently I’ve had wonderful views flying over the wild and remote Kimberley region of Western Australia. Or click for some of my favourite ‘views out the window’ in 2008 and in 2009.