I love the ‘view out the window’  and take lots of photographs when I fly places but we don’t often get a good aerial look at the airport. Flying in to San Jose, Costa Rica the flight in front of us was a bit slow getting off the runway and our pilot had to abandon the approach and make a circuit of the airport. Giving me this fine view of the terminal with assorted aircraft lined up: 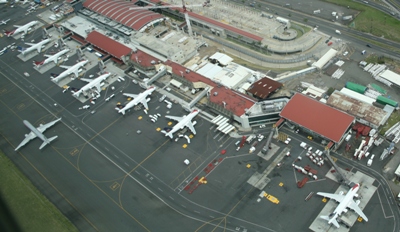 Flying over London mid-year I had this terrific view looking straight down on Heathrow. The airport has just two parallel runways, Terminal 4 is at the top of the picture, Terminals 1, 2 and 3 are in the middle. 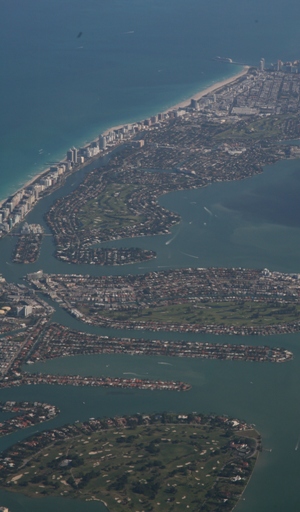 I flew to Costa Rica via Miami, this is the view of Miami Beach as we came in over the coast.

Flying in to Bangkok just before dawn one morning the view was a jumble of colours and lights inside and outside the aircraft including an assortment of reflections on the window.

On a British Airways Airbus 321 from London to Rome we had great views of the Swiss Alps:

The best views of 2009 were all in wild and remote regions of our world. Flying across Australia’s Kimberley region on a trip to the Kimberley Coastal Camp from Broome was just one fabulous view after another. I posted a Flying across the Kimberley blog with a handful of those glimpses from our single-engined Cessna  210.  Near Nome in Alaska, not far south of the Arctic Circle, I made two helicopter flights (on a Robinson R44) out to Eskimo sites, a rock painting site and an historic stone cairn. I was up in Alaska working on an LPTV/National Geographic TV program and doing some bear watching.  A week later there were more great aerial views, this time from a DH Beaver floatplane as we crossed Kodiak Island.