A Tourist Museum – Russell-Cotes in Bournemouth 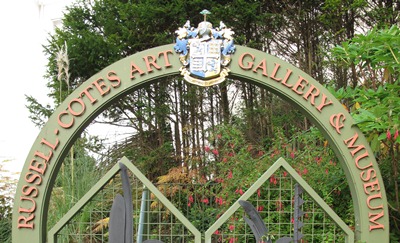 My recent southern England museum tour included one more interesting place, the Russell-Cotes Art Gallery & Museum. Merton Russell-Cotes was a tourism pioneer in Bournemouth, one of the towns which pioneered ‘going to the seaside’ tourism in England. He bought the Bath Hotel in 1876, upgraded it to the rather more glorious Royal Bath Hotel in 1880 and everybody from Oscar Wilde to Benjamin Disraeli came to stay.

◄ The art collection features the pre-Raphaelites and an assortment of statues.

Later he was elected mayor of Bournemouth and what did he spend his tourist wealth on? Why on being a tourist of course, he travelled to Australia, New Zealand and the Pacific, to Japan, Egypt, India and the USA and shipped back a considerable collection of artwork and – well – souvenirs. Then he built the decidedly eclectic East Cliff Hall to house his collection of art as well as his tourist collection. It’s a great place to visit and I could definitely identify with Sir Merton’s touristic enthusiasms!