The Solomon Islands – a great place to travel. I started my Solomon circuit with a visit to Uepi Island on the Marovo Lagoon, a beautiful lagoon, interesting islands, fabulous scuba diving, lots of friendly sharks and some huge manta rays.

From Seghe, on the edge of the lagoon, I took a short flight to Munda. Here’s the Seghe Airport departure lounge. ▼

In Munda I stayed at the Agnes Lodge, right on the waterfront and right by the pier. The only time village kids weren’t leaping off the pier into the water was when a boat pulled in. ▼ 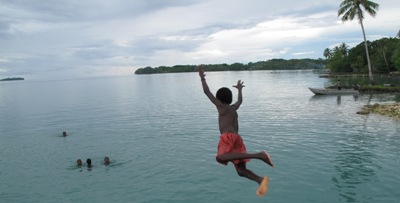 If you tired of watching the kids there was plenty of other lagoon activity including the constant arrival and departure of boats and canoes. These islanders are paddling in for the morning market. ▼

Munda was another site for the all out battle to dislodge the Japanese forces during WW II and Barney Paulson’s little museum features an interesting collection of rusty junk he’s salvaged from the jungle around the town. ▼ 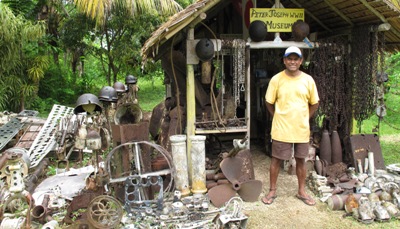 Including this collection of American and Japanese dogtags. ▼ 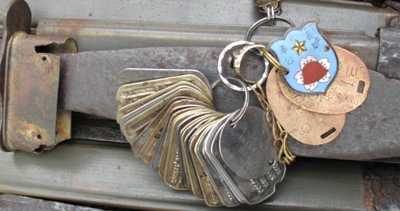 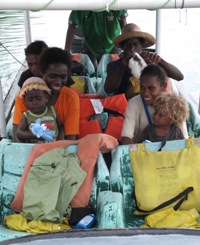 ◄ An outboard-powered boat whisked me – and my fellow passengers – further north from Munda to Ghizo. We covered the 50km in 2-1/2 hours and I arrived completely soaked, a combination of rain and spray thrown up by the boat. The fare was 200 Solomon dollars, about US$30. 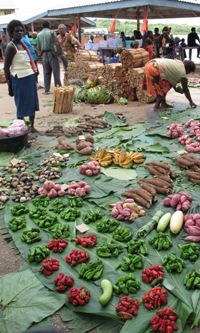 It was market day in Ghizo and there was certainly plenty of fruit on sale.►

Plenty of fish as well. Once again Ghizo offered World War II reminders and great scuba diving. I’ve posted a blog on crossing US president John F Kennedy’s path while I was in Ghizo, this is where his motor torpedo boat PT 109 was rammed and sunk by a Japanese destroyer. ▼ 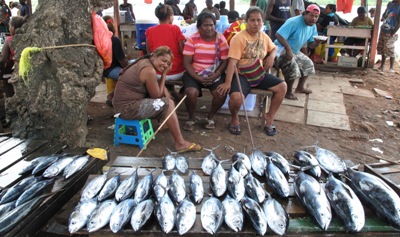 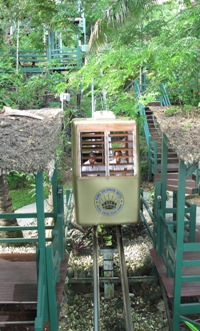 ◄ Finally I made my way back to Honiara, the capital of the Solomons. I stayed in the King Solomon Hotel, built against a hillside and featuring a funicular to transport you up the hill to your room.

As everywhere in the Solomons many of the shops and restaurants are run by Chinese. The Island Fast Food Centre is really the Golden Crown Chinese Restaurant, as the crown in the window indicates. It may not look very flashy, but the food wasn’t bad! ▼ 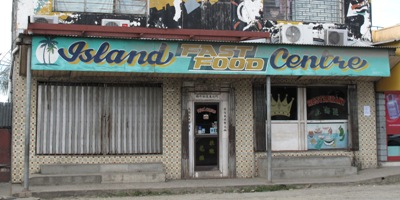 Finally there was more wartime history to investigate at places like the informative US War Memorial on Skyline Ridge. It overlooks the town and the waters of Iron Bottom Sound, So many ships – Japanese, American and Australian – went down in Savo Sound that it was dubbed with this descriptive new name. ▼