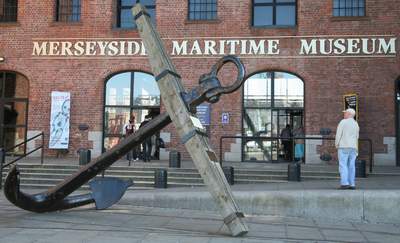 Last month Maureen and I travelled up to Liverpool (European Capital of Culture for 2008) for a little culture. We stayed at the Hard Day’s Night Hotel, visited the Beatles Story Museum, took the National Trust tour to John Lennon’s and Paul McCartney’s childhood homes and caught the Klimt exhibition at the Tate Liverpool. Plus we had a look around the excellent Merseyside Maritime Museum. The Titanic and the Lusitania were both Liverpool registered but so was the Empress of Ireland which went down two years after the Titanic and resulted in more passenger deaths (840) than the Titanic (817) or the Lusitania  (791). 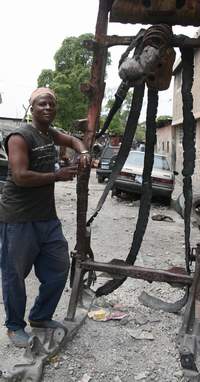 The Maritime Museum building also houses the excellent International Slavery Museum and (here’s the Port-au-Prince connection) the collection is fronted by a powerful piece of  ‘junk-yard sculpture’ from Haiti. When I was in Haiti in March I dropped in on the Grand Rue Artists, led by André Eugène who melds all sorts of junk together to produce wild and wonderful voodoo-inspired art works. Like the piece which found its way to Liverpool.

I’ve no idea what it’s about but I also came across this Liverpool mural on a wall in the Haiti south coast town of Jacmel.