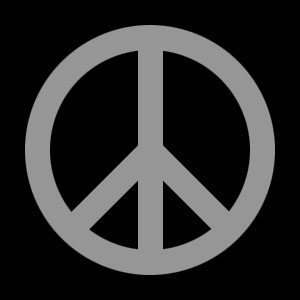 We all know the peace symbol – which actually started life as the semaphore symbols for the letters N and D since it stood for Nuclear Disarmament.


From there it became the symbol of CND, the Campaign for Nuclear Disarmament. Today we’re down from 70,000 nuclear weapons at the end of the Cold War to around 20,000. Which is still 20,000 more than the world needs.

Vision of Humanity, the people who bring you the Global Peace Index, are looking for a new peace logo and they’re running a competition through Bebo.com.

Come up with the best symbol before 4 October and you could win a trip to Washington DC for the Global Symposium of Peaceful Nations on 1-3 November.

This year’s Global Peace Index (I was there for the launch in London in June) ranked New Zealand as the most peaceful country on earth.