A Beer in Pakistan 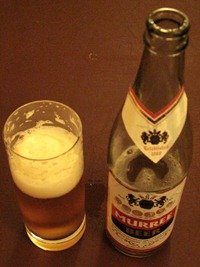 ◄  Yes, it’s a Murree Beer, the national beer of Pakistan. In fact the only beer of Pakistan. Officially Pakistanis – good Muslims all (or almost all) – can’t touch alcohol. Which makes being the country’s only brewery a difficult business, you would think. In fact Murree Beer is a thriving business, quoted on the Karachi stock exchange and with sales rising year on year.

I had a beer delivered by room service to my Islamabad hotel room, the hotel didn’t seem to have a bar. When I checked out my bill included a small charge (less than US$1) for issuing a liquor permit, presumably to certify that I was a ‘non-Muslim foreigner’ the only category of drinker allowed. The poor Murree Brewery can’t even export their tipple, but if that restriction is lifted they have the advertising slogan ready to go: ‘have a Murree with your curry.’ 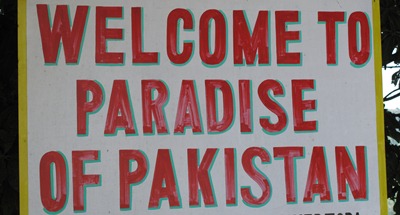 ▲ Today the Murree Brewery is in Rawalpindi, Islamabad’s nearby sister city, but the name comes from the hill station a 60-70km drive from Islamabad. At 2176 metres it’s much cooler than the capital, hence the ‘paradise’ claims.

▲ From GPO Chowk in Murree I walked along The Mall to Pindi Point and back, then went on to Kashmir Point to admire the view over to India and Kashmir. A Murree curiousity are the little ‘strollers’ or ‘prams’ which are used to push children and people too lazy to walk.