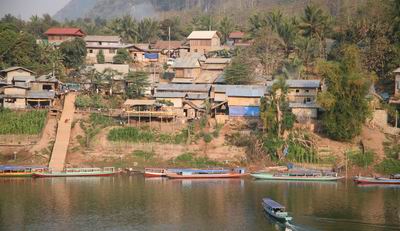 The village of Nong Khiaw on the Nam Ou River

Tourism in Laos is still so new that exciting new destinations and activities are still to be found. Our Laos guidebook is going to featuring new additions and suggestions for many future editions. I’m in Laos working on a new Lonely Planet’s Roads Less Travelled production for Lonely Planet TV, it’ll be shown later this year.

Tiger Trails/Fair Trek, the Luang Prabang eco travel company had recently discovered a previously unvisited series of waterfalls – well unvisited by travellers, the local villagers had known about them forever. We set out to explore them. Our jumping off point was the village of Nong Khiaw on the Nam Ou River, a day trip north of Luang Prabang and I’ll talk about my trip to Nong Khiaw, on an old Russian Minsk motorcycle, in a future blog. 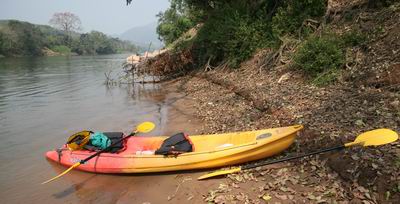 Our kayak on the banks of the Nam Ou

In Nong Khiaw we met Markus Neuer at the Fair Trek office and Markus and I, accompanied by local guide Hom, set out to kayak the 15km downriver to the village of Ban Dong Khun. We took kayaks just to make a bit more of an adventure out of the whole trip. It’s a winding river with short stretches of gentle rapids, or at least they’re gentle in March, well into the dry season! 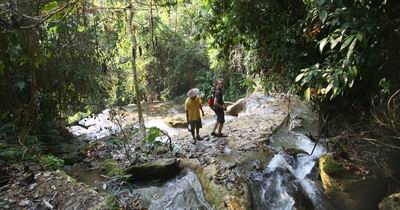 At Ban Dong Khun we met the naibom, the village headman, who showed us where we would stay the night, in the village guest house. Then with a local guide we set out to explore the falls. It’s a 45 minute walk from the river to the start of the falls and then it’s simply a matter of clambering up, higher and higher, from falls to pool to cascade and then all over again. Markus has explored for over an hour up the hillside, but that still hadn’t brought him to the source of the falls, but it does bring you to a 20 meter high falls which, for the moment, is where the 100 Waterfalls trek ends.